skip to main | skip to sidebar

A Window Into the Mind of the Berrien County Prosecutor's Office 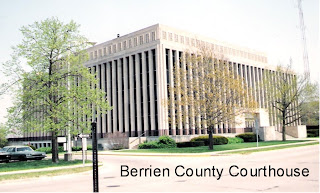 Thursday, December 4, 2008, Berrien County Prosecutor Art Cotter made an appearance at a public hearing to consider the commutation request of Efrén Paredes, Jr. He traveled nearly two hours to and from the hearing and spent nine long hours at the event at taxpayer expense.

Cotter was flanked by Berrien County Chief Asst. Prosecutor, Michael Sepic, and the Berrien County Sheriff, Paul Bailey, and four other local Berrien County police chiefs who came to show their support. All these individuals are White.

In a bold and desperate move to curry favor with the Michigan Parole Board Cotter abused his opportunity to speak as a forum by attacking Efrén's character at the age 15, the time of his arrest. Using rap lyrics from multi-platinum selling rap artists N.W.A. found in Efrén's high school locker, Cotter attempted to convey to the Parole Board that the N.W.A. lyrics were a window into Efrén's mind.

This was an inflammatory move Sepic used 20 years earlier when he introduced the lyrics to a nearly all White jury during Efrén's trial, who is Latino. Only at that time Sepic had enough decency to not offend the citizens of Berrien County by reading the lyrics out loud in front of those whose support he needed to remain in office at the time.

This time when Cotter and Sepic took their show on the road they thought their openly racist attitudes would go undetected.

Seated directly before two African-American Parole Board members — including the chairperson — Cotter read verbatim the lyrics from the song "Gangsta Gangsta," including every expletive. He also brashly and unapologetically used the words "Ni**er" and "bi*ch" as he openly disrespected the elderly, young and worst of all, several African-American people present.

It was a shameful and offensive display of public service that repulsed everyone present.

As a representative of the citizens of Berrien County Cotter's unethical actions only served to reinforce the widely held belief that the Berrien County Prosecutor's Office has no regard for minorities receiving justice in their county. If Cotter and Sepic do not respect minorities as human beings, they could care less what treatment they receive.

This is evident with the long turbulent history that Berrien County has of mistreating minorities in its courts and trying them repeatedly before all White or nearly all White juries. It is an issue that has generated national attention in recent years, and the wrong kind of attention the county deserves. The four police departments represented by white males have the same reputation.

Cotter's actions reflected his ignorance about the hip hop community and the rap industry. Had he conducted even minimal research he would have discovered that the song he read has been purchased by consumers millions of time on CDs, and even as ringtones for cell phones. He would have known that millions of people all over the world have N.W.A. songs on their MP3 players.

By Cotter and Sepic's flawed logic all these people would be deviants and have inclinations of being murderers. By their standards life imitates art and we would have a nation of killers roaming the streets because of the music they listen to.

Dr. Dre, N.W.A.'s founder and producer, is one of the most successful producers in history. He has produced music for some of the highest selling rap artists of all time, including Snoop Dogg, Tupac Shakur, 50 Cent, Eminem, and many others.

Members of N.W.A. also went on to become multi-platinum artists when the group later separated. The author of the lyrics to "Gangsta Gangsta," Ice Cube, went on to continue releasing several albums and become an accomplished actor in over a dozen films including "Friday," "Barber Shop," "State of the Union," Triple X," "Three Kings," "Are We There Yet?" and others.

Cotter and Sepic argue that Efrén poses a danger to society based on his preference for rap music as a teenage boy. No one poses a greater danger toward the citizens of Berrien County than these two members of the Prosecutor's Office who will stop at nothing to destroy someone's life and secure a conviction.

The hip hop community and listeners of rap music are under siege in Berrien County. Until the citizens of the county decide to demand that the racist mentality and stranglehold on minorities desists, they will continue falling victim to the Cotter and Sepic web of treachery and injustice.

It is an issue every Berrien County resident should take with them to the voting booth next time they elect a prosecutor to represent the county. Malfeasance should no longer be the face of Berrien County.

To learn more about the case of Efrén Paredes, Jr. please visit www.4Efren.com or http://4Efren.blogspot.com. You can also click here to read my article about Efrén's public hearing which was held December 4, 2008.
Posted by Necalli Ollin at 9:31 PM

Necalli Ollin
I am a freelance writer that covers social injustice and human rights abuse issues. I have taken great interest in the case of Efrén Paredes, Jr. who currently awaits a recommendation from the Parole Board to the Governor of the State of Michigan about his release. Efrén has received international attention supporting his release which is growing exponentially each day. To learn more about the case of Efrén Paredes, Jr. visit www.4Efren.com and http://4Efren.blogspot.com.